I BELIEVE IN DRAGONS

We all have some degrees of paranoia within our character. Also the very decent and rational people have unexplained fears which would bring them to a level of horror and helplessness. This is normal state and the less we resist against it, the more we will be able to survive in life… it is because we are humans… and humans have a really great capacity of thinking potential. It is only 5% of the brain which is used.

So, what does the brain do when it does not control the body, learn a new skill or solve a problem? Rubbish! Thinking is just jumping from here to there and getting distracted by every possible thing… remembering, combining… and all such things. We are not able to explain in depth, what between the neurons happen… still doing the baby steps in research. That is a feast for the unconscious mind… and it uses every possibility to find new ways of adventerous thinking.

That’s why we need to take the control of our minds. Yes! This is the new motto in the current age and the methods vary from meditation to energetic healing, training awareness and also yoga. All is fine and it helps definitely. I chose an other method… it is learning… and problem solving.

The world is full of problems waiting to be solved. I don’t mean the economic, political or relationship problems of humans, states or countries… I am also not referring to the mathematical millennium problems, whereas embracing them would definitely outburst the mind… My problems are about understanding the weaving of a spider web, the fiddle-head ferns opening in the forest or the humans decoded to be a set of energies. In some cases it is easy to recognize the patterns. Starting from an octagonal drawing for Halloween decoration to a more complicated Fibonacci sequence, one can find the patterns everywhere. The nature is predictable, in most cases it can be explained even if some butterfly effects have to be defined first.

How about the humans? It leads to the assumption that our existence also has a meaning and it follows a pattern. Some call it fate and do not bother about it… and others fight against their fate… and that changes the system. Every action has a reaction… with every single decision we take day by day, we are changing the future… the pattern is rewritten daily and the new one includes the changes in the meantime.

One does not need to have any knowledge about computer programming to understand what it means to enhance a program every day. Not only the mental capacity needed, but also the storage problem of the quell code is challenging. Having said that, it reminds me mentioning we would only use 5% of our brain… So actually we have the capacity for saving the patterns of our life, remodeling them unconsciously and separating the daily mode of operation from the visionary one. What if our brain exchanges fate programs constantly with other brains in form of energy waves and tailors and optimizes the pattern balance on earth? Let me call this the theory „fate patterning“ in case some day people find my words and can date them back to year 2021. Anything is possible!

All technical achievements and scientific inventions were once in the fantasies of some former people who have written about their ideas which later were read by others and have inspired them to work in that area. Why not me? Sometimes I feel like writing impossible things in order to make a kind of reset in my thinking and throwing off ballast. It makes space for thinking other weird subjects… like the dragons.

I have been thinking about the dragons for some time now. Like the unicorns, they are more a fable figure… what if they really existed before their extinction? The human mind can exaggerate and make up ridiculous things, but the concept of dragon exists in many many cultures. From the evolution theory, the body of the dragon does not seem to be from Mars either. Dinosaurs have been proven to exist, so why not the dragons?

Dragons have been described as huge reptile like creatures, sometimes with wings and breathing fire. These monster-like species are doomed in some myths as they have the power to fertility and rain. In other stories their intelligence is highlighted and deals are made in order to tame them. The part with breathing fire is the most credible for me, as it has been proved that other gases of living beings are also flammable. Not only the evolution theory and historical stories make me believe in dragons, but the concept of a pure and loving character packed in a dangerous and unpredictable shell… This is more or less the opposite of having some levels of paranoia in a respectable looking person… 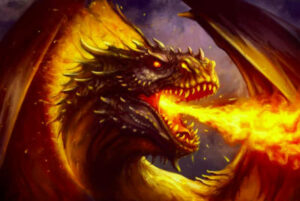 Come and embrace with me all the dragons of the world… real or fake… in the history or current life!